The ALTA Board meets four or five times a year, and may also meet via conference calls. At its Annual General Meeting, held during the Alberta Library Conference each spring, the Board reports to the membership, adopts a budget, and considers resolutions. The Association President and regional Directors are elected.

The ALTA Board consists of:

Dr. Tanya Pollard is from Westlock, Alberta, where she lives with her darling husband Dan, their 5 adopted children, 2 dogs, 3 cats and 2 frogs. She loves to garden, go back-country camping and is an accomplished seamstress. Tanya grew up travelling the world, and has called Malta, Ireland, United States, Qatar and Italy home, but she always manages to find her way back to Canada. She holds degrees from Harvard University, Simon Fraser University and the University of Alberta in Criminology, Education and Family Studies. Tanya is an active homeschooling parent and a strong advocate for child-centered education. She is the Primary for Earth Child Educational Consulting- providing customised educational supports for children to meet their academic goals. Tanya has been connected to libraries from the time she learned to read. She visits libraries in every destination she travels and is actively involved in the library community in Alberta. She is currently the chair of the Westlock Intermunicipal Library Board and has been in that position for the last 9 years. Tanya has represented Area 2- Yellowhead, on the ALTA board of directors for the past 4 years. She has been the ALC Planning Committee Co-Chair for the past three years, working to bring excellent conference materials forward for trustees. As a member of the ALTA board, she has presented trustee learning sessions at Yellowhead, Peace, and Northern Lights regional conferences and taken time to assist libraries around the province with their board governance issues. She was on the planning committee for the 2018 ALTA and PLSB sponsored HR symposium. At home in Westlock, when she is not advocating for libraries or chasing puppies and children around the yard, she can be found volunteering at the food bank, gardening at the community garden, serving on the FCSS board as Vice Chair or coaching soccer for the Westlock Soccer Association. 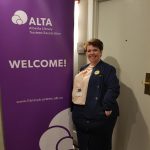 I have lived in Alberta for the past 44 years, and I have been in Carstairs since 1996. I have retired from a 38 year career in the airline industry, where I worked in many different areas, mostly in the customer service area, and the sales area. I am in my fourth term as a town of Carstairs councilor, having served 11 years to-date, and I have been on the board of the Carstairs Public Library for the past 8 years. I am also a current executive committee member sitting on the board of the Parkland Regional Library. In addition, I have also served on the Alberta Library Trustees Association board for the past 3 years. I am involved in a number of other community and charitable organizations. At present, I am the president of the Friends of Alberta Junior Hockey Society, a non-profit organization whose goal is to financially assist young athletes with scholarships to continue to play hockey at a competitive level, and also pursue their education at post-secondary school. I have served on this society for 35 years. I am also involved with the Carstairs and District Historical Society, and I am active in the Carstairs Bancroft United Church. 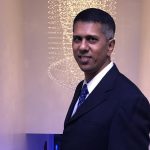 Lennox has been serving as a member on the Chestermere Public Library board since 2010 and as the Vice-Chairman since 2016. He has also been serving as the Marigold representative for the Chestermere Public Library since 2015. He has been working as a Field Service Manager at Canon Canada Inc. out of the Calgary office since 2009. His day-day activities include handling a team of technicians and sales representatives to ensure high levels of customer satisfaction. He has undergone various training on organizing and conducting meetings, dealing with irate customers and handling escalations. He practices all these on a daily basis in his current role at Canon as well as at the Library Board. He is a certified Electrical Engineer besides being certified in various fields in IT. He is also certified in Business Management and currently certifying in Lean Six Sigma optimization. He would bring a rich experience of serving others, having volunteered in different capacities at the local Library, Recreation Centre, Country Fair, Citizens on Patrol, Agricultural Society, etc. He is great at organizing things, from meetings to events to fun activities for volunteers and teams. Lastly, he would bring a different perspective to things, being born & brought up in Goa, India. Then having worked in diverse places like Kenya, Uganda & Tanzania. Before finally moving to Canada in 2004 & living and working in different cities like Toronto, Calgary and now Chestermere. Lennox is currently a resident of Chestermere, Alberta since October, 2009. 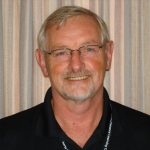 I am a teacher by profession and am currently employed with Alberta Distance Learning Centre where I am the English Department head. I have been involved with the library world for many years; first of all as the Council representative to the Coaldale Public Library and was in that position for a number of years. I was the chair of the Coaldale Public Library and have served terms as President, Vice-President, and Treasurer of ALTA. I have also been involved in Chinook Arch Regional Library System for many years in a variety of postions such as Chair, Vice-Chair and Treasurer. Not all at the same time but at different points in my career. I am currently in my second term on the Lethbridge Public Library Board and I am serving as chair of that board. I live in Lethbridge and have lived in that area for most of my life. 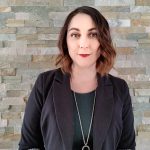 Being a stay at home mother of 3, originally with a background in banking and finance, at my core I am an avid reader, lover and supporter of libraries. I reached a point in my life, where I was ready to find ways to become involved within my community. I thought, I’ll join the Town of Morinville Library Board! Originally as the Treasurer, and now serving as Board Chair. Little did I know that I would be thrust into being part of such an integral part of my community. I am regularly in awe of the people who make libraries exactly what they are today. Being a board trustee is such a privilege to have, and such a role requires a strong basis of support which ALTA makes a point to provide. I would love the opportunity to collaborate and contribute my enthusiasm for library services to such a great organization as ALTA. I aim to be able to continue my advocacy for libraries by expanding my access to the people who share my enthusiasm for libraries. 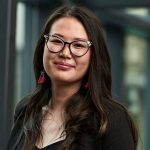 Born and raised in Calgary to refugee parents, Jocelyn credits the Calgary Public Library for helping her family settle into their new community and adapt to Canadian culture. Beyond this, the library was a space for many firsts for Jocelyn: where she got her first membership (library card!), set up her first email account and joined her first club. Thanks to the librarians and clerks who encouraged her to share her love of reading with others early on, it was also at the Library that Jocelyn developed a life-long passion for volunteerism, knack for storytelling and deep interest in place making. For Jocelyn, the feeling of wonder and curiosity when you enter the library has never gone away. She considers libraries as essential components in all communities because they are spaces where ideas are born and grow; most importantly, libraries are versatile institutions that serve all of society regardless of age, ethnicity, gender or socioeconomic background. Jocelyn is a fierce advocate for the right for accessible digital literacy education in Alberta and strongly believes that knowledge should be democratic, free and open.

Brian Heidecker LLD (Hon) is the Board Chair Emeritus of the University of Alberta, an organization he volunteered with for over 30 years. Brian is an avid “Champion of Education” in all forms. He served as Trustee and Chair of Clearview School Division, on the Canada Council on Learning Board, and chaired the Access to the Future Endowment Fund review. Brian has vast experience on a multitude of Boards including the Bank of Canada, ATB Financial, Alberta Ingenuity, the Agricultural Development Corporation, the Alberta Securities Commission, the Critical Transmission Review Committee and the 2002 Alberta Financial Management Commission. He was a Board member of Northern Alberta Jubilee Auditorium during the 2005 renovations and rededication. In addition, he served on countless agricultural and cattle industry organization Boards. In 2000-02, he co-chaired AgSummit 2000, a provincial wide public consultation focused on setting appropriate policies for Alberta’s burgeoning agriculture and food industries. Over 2200 Albertans participated. He is on the Board of the Fringe Theatre Adventures and the Investment Industry Regulatory Organization of Canada. He currently chairs the Sawridge Trusts, two First Nations entities originating out of the Sawridge First Nation of Slave Lake. Brian strongly believes in giving back to the community in which he lives. He is an active member of the Edmonton Horticultural Society and has been their Treasurer since February 2013. Brian was a successful large scale rancher and businessman in East Central Alberta before retiring to Edmonton in 2000. Among them, his four grown children have eight University degrees and one Professional designation. He and Donna Bagdan are avid gardeners, living and growing award winning gardens in the West end. Brian and Donna are proud grandparents of four grandsons and two granddaughters. 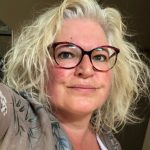 Heather brings a valuable combination of non-profit, business and government experience to the Executive Director role. Attending Brandon University, she obtained her Bachelor of Arts Degree in Psychology with a minor in Political Science. Committed to lifelong learning, she has become a Bunraku puppetry Master/Trainer and enjoys sailing, brain gym, yoga, hiking, meditation garden and spending time with her family. Before joining ALTA, Heather was the Community Coordinator with Community Relations and Strategic Planning with the City of Edmonton, Program Manager and Health Promotions Director with EEA, Alberta MS Public Relations Director and Canadian Red Cross Manager of Volunteers and active with the National Red Cross Disaster Responder Team. Heather co-owned and launched the first interactive corporate theatre company in Western Canada. Contracting with Hotels and Conference Planning Managers, theatre and entertainment productions were customized and developed for National and Provincial Events. She was chosen for the role of Producer Assistant in the development of a CBC television history movie documentary. Growing up in a small prairie town in Manitoba, Heather frequented her local community library always trying to take out more books than what was allowed (two books) and to persuade the librarian to purchase more of her favorite books. Heather is committed to supporting Library Trustees across Alberta.